About These Practice Sessions

We tentatively PLAN to start with (more or less) ballroom-style COUPLES Waltz dancing.
But the "majority vote" of those attending will determine dance to be practiced (ie. waltz, swing, or something else).
~~The dance practice is not line dancing (although many steps are common). The first evening may LOOK somewhat like a line dance session, as we may spend most of the time with people doing the steps by themselves.

~~~~~We really think the "East Coast Triple-Step Swing" dance is the most USEFUL dance (can dance in bars, weddings, to live bands, almost anywhere).
But several complained about the "guys getting lost" (as is quite common).  So we thought it best to START with waltz, since it's "step on every  beat" structure should make it easier for the guys who are new to dancing.
The waltz may not be their favorite dance, but practicing it should hopefully help with developing "brain-to-feet" coordination.  We hope to go SLOW enough, that people don't feel like they are getting "lost".
-
The "plan" would be to start with waltz, move to single-step swing, then triple-step swing -- although we'll probably run out of time long before that happens. 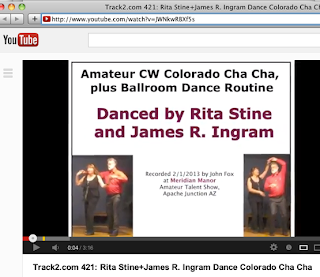 If you can tolerate being bored for a minute, you can watch our 2013 Meridian Manor Amateur Talent Show routine on Youtube    :)